The Joe Locke - Geoffrey Keezer Group last performed at the Bach on July 8, 2012. 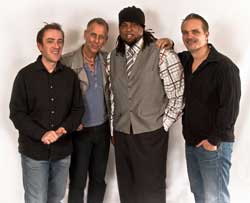 After the award winning album 'Live in Seattle' (Origin, 2006), the foursome of vibist Joe Locke, pianist Geoffrey Keezer, bassist Mike Pope and drummer Terreon Gully have recently reunited to record the long awaited follow up, 'Signing', finding the group more mature without losing any of the incendiary chemistry that defined its debut.

A balance of controlled abandon is a perfect way to describe Locke's performance. It becomes immediately clear that this is deep music, filled with underlying challenge and complexity, whether it's the undeniable grooves, or the melodies. Locke and Keezer share an almost telepathic empathy, which positions them as the most emotionally arresting piano/vibes team since Chick Corea and Gary Burton.  'Signing' is Locke’s quintessential choice to kick-start his new relationship with Motéma Music. "I feel that what we do really defines who I am musically."